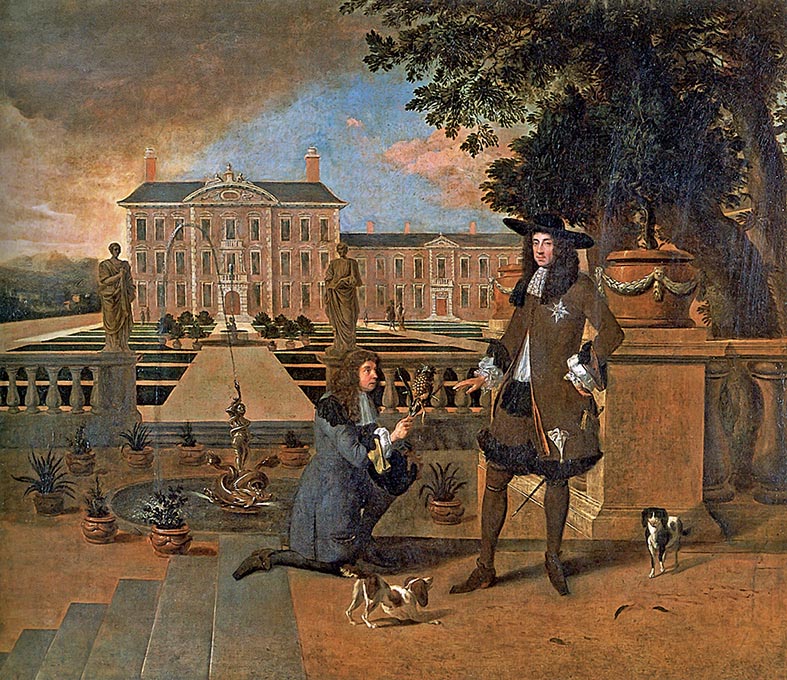 In 1666, Charles II introduced a ‘new fashion’. He adopted a long waistcoat to be worn with a knee-length coat and similar-length shirt. This marked the birth of the English suiting tradition and over time the waistcoat lost its sleeves and got shorter until by around 1790 it became the length that we are familiar with today.

Arthur Wellesley, the 1st Duke of Wellington asked his boot-maker to modify the 18th-century Hessian boot so that it could be both hardwearing for battle, yet also comfortable to wear in the evenings. The new boot was made from soft calfskin leather and was cut more closely around the leg without a trim. Worn and popularised by the Duke, they were dubbed the Wellington and became a staple of hunting and outdoor wear for the aristocracy in the early 19th century. In 1852, they were then made fully waterproof after the invention of the vulcanisation process for natural rubber, the boot was then adopted by farmers and became the boot that is a staple of the countryside today.

Between 1750 and 1830, influences from equestrian country clothing began to English tailoring. Style leadership shifted from the aristocracy at court to the landed gentry and mercantile middle classes, a shift which ran concurrently with an increasing professionalisation of the commerce and manufacturing which fuelled Britain’s economy. By the early 19th century, the riding coat had developed stylistically to be a tailcoat which included a double breasted row of buttons, a high collar and a steeply cut away front.

The Bowler hat may make you think of Winston Churchill but the Bowler was in fact designed in 1849 for Edward Coke, the younger brother of the 2nd Earl of Leicester by Thomas and William Bowlers for hatters Lock & Co. of St. James’s. The brief was to create a hat for Coke’s gamekeepers to protect them while they were riding. Referred to as the ‘Coke’, it was worn by laborers until its adoption by Edward VII. Its characteristic domed crown and curled brim remained emblematic of the London City gent and the Bowler hat’s international appeal meant it was the most popular hat in 19th century America overshadowing both the Stetson and the cowboy hat.

By the 1910s Thomas Burberry’s development of water-resistant gabardine led to outdoor-wear commissions for Britain’s early expeditions to Antarctica and the South Pole. In 1901 Burberry was commissioned by the War Office to design its officers’ uniforms, a charge which would develop in 1914 into the creation of its most iconic product. The cloth-quality and attention to detail of the Burberry Trench coat represents a British modern sensibility; its stylistic associations vary between military, rural and high fashion.

Tartan is inherently linked to the origins of the Scottish nation. In the 1920s the Prince of Wales, later the Duke of Windsor combined traditional British plaids, tartans, and tweeds with spots and stripes making him a style ambassador for the British textile and manufacturing industries. Tweed is a derivation of the Scottish word ‘tweel’,  misread by an English merchant in 1830 and influenced by association with the River Tweed in Scotland. Harris Tweed is the most iconic cloth of tweed and is still hand-woven by islanders in Scotland – fashion pioneers Vivienne Westwood even named a collection after the brand in 1987.

Modern Brogues trace their roots to the late 18th century in rural Scotland and Ireland. In their early form un-tanned hide and punched holes allowed water to drain from them while crossing wet terrain. The Brogue’s transition from rural practicality to urban fashion occurred when the Duke of Windsor wore brogues on his golfing trips to Scotland.

John Stephen and Michael Fish can both lay claim to the introduction of the tailored floral shirt and tie. Stephen opened his first store at 5 Carnaby Street in 1957 where he commissioned menswear made from patterned and textured fabrics previously not used in men’s fashion. In the early 1960s Jermyn Street shirt-maker, Turnbull & Asser, employed Fish to inject an air of youthful exuberance into the firm’s range of classic shirt designs. In 1966 Fish opened his own boutique, Mr Fish, on Clifford Street in Mayfair where he sold ‘kipper’ ties, colourful suits and separates.